Since its introduction in 1986 of the first weapon-mounted light (a novel concept at the time), SureFire® has continued to set the standards by which all weapon lights are judged – now with the SureFire M300 Mini Scout.

The SureFire Scout Light® needs no introduction. With many different models to choose from, there’s a Scout Light for nearly any mission requirement and individual preferences. Where size and weight are issues and performance cannot be compromised, the SureFire M300 Mini Scout Light® is an outstanding choice.

Powered by a single 123A lithium battery (included), the SureFire M300 Mini Scout Light’s virtually indestructible Cree LED has recently been upgraded to 300 lumens of tactical-level light. The upgraded light maintains the same ultra-compact light weight of its predecessor, measuring just 4.1 inches long and weighing in at only 4.8 ounces with battery.

Focused by a proprietary 22mm TIR (Total Internal Reflection) optic, the M300 Mini Scout Light provides plenty of reach for mid-range applications and enough surrounding light for close quarters. Also called a “collimating lens,” a TIR optic collimates the light and sends a concentrated beam of light out in the same direction.

The redesigned TIR optic produces a smoother beam with fewer artifacts than previous generations of TIR optics. The M300 Mini Scout Light provided for evaluation has superb beam quality with no noticeable artifacts. The M300 has an anti-reflective coated scratch-resistant borosilicate glass window that resists impact and maximizes light transmission.

The issue of heat management is at the core of many LED-based lighting applications in order to maintain the longevity of the LED. All SureFire LED illumination tools are thermally regulated to keep the LED junction temperature below the recommended limit. When run continuously, the SureFire M300 Mini Scout maintains its initial level of output for only a couple of minutes and then begins a decline until it drops out of regulation.

This SureFire M300 Mini Scout Light comes with an installed click-type tailcap pushbutton switch only—press for momentary-on, press further to click constant-on. The tailcap switch is shrouded to minimize the chance for accidental activation. Remote tape switches can also be ordered from SureFire as options.

Save With Our Exclusive Discount Bundle 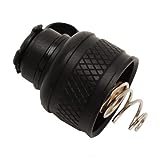 Designed specifically for Scout Light models equipped with a thumbscrew clamp, the RM45 positions the light in the offset position between the rails of a MIL-STD-1913 (Picatinny) forend. The RM45 is constructed of aerospace aluminum and hard anodized with a milspec Type III finish. It adds very little weight to your weapon.

The M300 Mini Scout Light has a suggested retail price of $299.00 and is backed by SureFire’s No-Hassle Guarantee.