It’s name makes clear that this is a knife built for desperate times and desperate measures. Designed by the renowned Ken Onion, the CRKT Chanceinhell is made to perform in the most extreme and exacting situations.

A chopper and cutter, it’s “tough, strong and [works] like an ox,” the company says. “There are knives you see on survival shows. Then there are knives that give you confidence when they are your only Chanceinhell”

It’s a big claim, and not one the savvy survivalist will take lightly. So how does this hefty blade hold up under intense pressure?

Followers of Ken Onion will recognize his handle style, thank s to its three-finger indent. This handle feels very solid and full when in use.

Ken Onion’s collaborations with CRKT have been highly successful, and this chopper, which custom knifemaker Paul Granger considers a survival machete, is no exception.

Handle – The handle is CRKT’s own injection-molded PP Core and TPR Overmold with a faux pigskin texture. Granger describes this material as rubber-like.

The jimping on the top of the handle in the guard area is effective for this type of handle: a series of cross grooves that prevent the knife user’s finger or thumb from slipping. It is comfortable in both forward and reverse grips.

The guard is excellent, with a thumb ramp on top and an effective finger groove on the bottom. Its sub-hilt is helpful for indexing (knowing where the user’s hand is located on the handle).

Five tubes run through the handle, which, by using paracord or the equivalent, make it easy to attach it to a pole to make a spear.

By using the tubes and tying paracord in a series of cobra knots, the user can fashion a D-guard to make the knife more secure in his or her hand—something many knife and machete users like to do.

A swell on both sides of the handle make it hand-filling, a good feature. There is also a rise in the handle’s three-finger indent.

This is a common feature in a Ken Onion handle design. The butt of the Chanceinhell’s handle curves downward so that when chopping, the user’s hand won’t slide off.

This also helps in hand-to-hand combat because the knife’s operator can stun an opponent in a strike made with a backward swing, even though there is no metal pommel.

With its handle curved downward, the Chanceinhell is, economically, a very hand-friendly knife, especially when compared to similar tools made with a straight handle.

This downward curved handle allows the whole strength of the user’s arm to be behind his or her strike.

Paul Granger specializes in making fixed-blade knives of his own unique design, as well as in traditional patterns.

He has created a line of lightweight, non-metallic, non-ceramic knives currently in use by the American and Canadian militaries, multiple police departments, and the FBI and CIA.

Granger wondered how far the tang went into the handle. To find out, he applied a magnet and determined that the tang went all the way up the handle—a full tang. Inquiring minds would want to know. 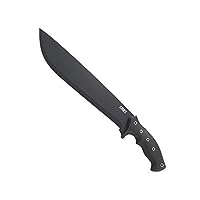 Straight on top, the blade is a drop-point machete made with a partial, or low, flat grind.

The blade, imprinted with the model number, is wider a few inches from the tip. This is indicative of a well-thought-out design that is ideal for chopping, as the wider section of the blade adds more mass and weight.

This width and the wedge effect of its low flat grind are great for the splitting and chopping tasks the Chanceinhell was designed to accomplish.

At 12 inches in length, the blade is substantial. It is made from a Chinese 65Mn carbon steel, which is comparable to 1065. The blade was not sharp out of the box, but because it is not serrated, can be easily sharpened.

The sheath has three snaps. To remove the machete from the sheath, the user needs to open the upper snape and pull the blade forward by rocking the knife.

A smooth plastic inner layer/liner and a welt within the sheath prevent the blade from cutting through. These are good features, as some nylon sheaths don’t have liners or welts. The Chanceinhell went in and out of the sheath smoothly.

Granger liked the sheath’s leg cord, though he would add an adjustable, spring-loaded cord-keeper to the bottom, instead of knotting the cord the way it arrived from the factory.

With its Velcro belt loop system, the sheath can be worn more securely or loosely from the belt, according to the user’s preference.

Longtime law enforcement and survival professional Mark Allen Prince took the knife out into the wilderness to put it through its paces.

The Chanceinhell arrived at the castle on a warm spring day. I was excited about this delivery as I was heading out into the bush of the very rural Southeast Ohio hinterlands to help teach a wilderness survival course for law enforcement (ranger) students. In other words, it could not have arrived at a better time.

The Chanceinhell Is a sizeable tool, measuring 17.88 inches total, with a 12-inch blade. It weighs in at 1 pound, 4 ounces, and the blade thickness is a narrow 0.1 inches.

Couple this with the over-molded grips with a pigskin texture, and the Chanceinhell is quite nimble once you have understood its balance and have used it awhile.

He has developed and teaches courses in homeland security and special operations for military, state, and local special operations personnel and organizations, and is an instructor-trainer certified by the late Colonel Rex Applegate.

I spent more than a month evaluating the Chanceinhell. Initially, I took it into the Ohio bush in the survival course, where it was a primary tool in all chores, including building my shelter, cutting wood for the fire, whittling tools and general security.

The Chanceinhell dealt swiftly with the pine trees, and surprisingly well with the incredibly resilient black locust trees, which can dull a lesser blade in no time at all due to the trees’ dense and twisted fibers, it also shone batoning firewood.

The design of the blade, with the belly dropping down below the knuckle line of the user, assists greatly in these tasks.

Thanks to its user-friendly grip design and lack of excessive weight overall, the knife lent itself well to carving things as small as a gorge-hook for primitive line fishing.

Around the castle, the Chanceinhell performed well in batoning hard maple for the grill, and was used in the kitchen to carve fat, juicy meats.

On a whim, I filled a half-gallon milk jug full of water and placed in on a table. With a measured blow at an approximate angle of 45 degrees, I lopped off the top of the jug while leaving the bottom resting on the table.

This is no great feat, but it was done after the factory edge had been long since removed and touched up with the kitchen steel.

The result of this test is a testament to the carbon steel edge, its ability to take a good field sharpening, and the overall ergonomic design of this lithe and effective filed blade.

The black nylon sheath is simple in its design and serves the operator well when carried in a traditional dangle from the belt “machete” carry.

It has multiple lash holes that will accommodate most users wanting to affix it to a pack, and a single retention device that maintains it securely in the sheath when carried vertically.

As the knife is not marketed as a “tactical blade,” it was not evaluated as such and should not be carried in an inverted or upside-down manner. The only design change I would recommend is that the sheath could be ambidextrous.

For general defensive and security purposes, I recommend that the Chanceinhell be used in the manner of a machete, kukri or parang. Using it in these ways, I found its performance to be strong.

At an MSRP of $69.99, the knife is a very good deal. The combination of CRKT and Ken Onion has proven to be outstanding once again. I’m confident that using this machete/knife in the field will give the operator a chance in hell.

INSPIRATION FROM THE PAST

Thanks to its size and profile, the Chanceinhell reminded reviewer Paul Granger of an ancient Roman gladius.

It's name makes clear that this is a knife built for desperate times and desperate measures. Designed by the renowned Ken Onion, the CRKT Chanceinhell is made to perform in the most extreme and exacting situations. A chopper and cutter, it's "tough, strong and [works] like an ox," the company says. "There are knives you see on survival shows. Then there are knives that give you confidence when they are your only Chanceinhell" It's a big claim, and not one the savvy survivalist will take lightly. So how does this hefty blade hold up under intense pressure? Followers of Ken…
CRKT ChanceInHell Machete Extreme Survivalist
CRKT ChanceInHell Machete Extreme Survivalist
nomad
0

When is a machete not a machete? When its the CRKT ChanceInHell Machete for the Extreme Survivalist. The ultimate all-round bladed tool and weapon.

User Rating: Be the first one !
Summary